A STONE FOR NINA 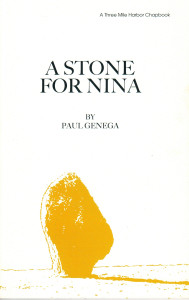 
Excerpt from A STONE FOR NINA

These things remain of her:

and a faded sepia photo a high cheek-boned woman at the helm of a speed boat, cat-grinning at the camera, captain’s cap cocked jauntily to the left. On the back in pencil: Nice, France, 1946.

These things have been moved from Washington to New York to Baltimore, back to D.C., back to New York, to a tiny village nestled on the Hudson twenty miles south of Albany. They sit in a cupboard silted by spiders.

Nina lies in a potter’s field plot in an unkempt part of Washington. She’s been there for nearly forty years.