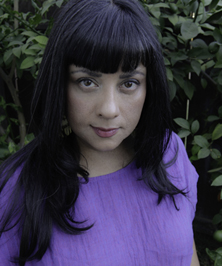 MARISOL BACA was born in Albuquerque, New Mexico, and grew up around generations of family in an old adobe house with a horno in the back that her father built. Her family later settled in Fresno, California. She grew up within a family of educators, artists, and writers, and at an early age began writing poems and songs. Marisol received her bachelors in English from Fresno State University and won the Andres Montoya poetry scholarship prize. She received a fellowship from Cornell University, and in 2006, she received her Master of Fine Arts. While at Cornell, she won the Robert Chasen poetry award for her poem, “Revelato.” Currently, Marisol is an English professor at Fresno City College. She lives in Fresno with her husband in a house in the center of town. She continues to write and teach, and is busy working on her second book. Her poetry has been published in Riverlit, Shadowed: An Anthology of Women Writers, Asentos Review, Narrative Northeast, among other publications.