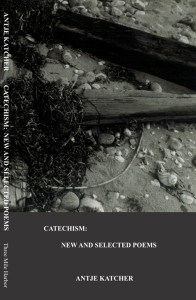 “Textual analysis and biblical references become their own form of artistic worship, sourced from a wordless beyond to remind us that raptures and virgins, prayers and exploding plastics really do have something in common.”– Lucas Hunt, East Hampton Star

Striking images and a clever play on words appear in several of the poems, particularly in the second section. In “Sybil,” for instance, “She draws hollyhock from bleached bone” held no meaning for me but is too beautiful to dismiss. The play on words is used to excellent effect in “Daedalus in Sardinia,” a mythic story of blind faith. Continually asked, “But …. what of his son?” Daedalus simply speaks of the sun, “a difficult god / jealous and unforgiving / of any free flight and would grant you nothing / but the separate ecstasy / of his own / blind insights” Similarly, “Down at the Dinghy,” a poem of yearning and aloneness, cleverly revolves around the sound of the words bourn, borne and born.

So much in all the poems in this collection is worth citing: the subjects, the language, the tone. Whether melancholy or playful, never did I hear a false note.–Rosalie Calabrese, The American Book Review

Greetings,
said the Unicorn to the Tailor,
greetings on this fine day

But, said the Tailor,
don’t you know there is no
such thing as a unicorn

Unicorns since that day
travel in disguise