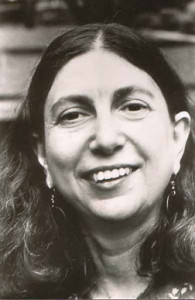 Enid Dame, poet, writer and teacher, died in 2003. Her book of poems Stone Shekhina
was published in 2002. In praising Dame’s collection of poems, Alicia Ostriker called Enid Dame
“One of the great midrashists of our time.” Philip Appleman noted her “inventiveness and verve”
as in the stories of Lilish and Eve, Noah and his family. Miriam and Esther spring to life again.”
Janine Pommy Vega observes that “She brings us their reality as they must have lived their lives-
with grace, not a little humor, and great resolve.” Dame’s previous collections include
Between Revolutions, New York: Downtown Poets, 1977; On the Road to Damascus,
Maryland. New York, Downtown Poets, 1980, Lilith and her Demons, Merrick,
N.Y, Cross-Cultural Communications, 1986, rpt. 1989, Anything You Don’t See.
Albuquerque, NM: West End Press, 1992. She Co-Edited Which Lilith? Feminists Writers
Re-create the World’s First Woman.